I'm too lazy to copy-paste it all here, so here's just the link.
I've scanned my latest fashion plates finds on my site and on my blog. And I think I'm in love with the little Queen of Hearts.

So the kids have a sitter again - who's a friend on top of that, and literally lives next door. I don't even have to put on real shoes to drop them there or pick them up. I. Am. Happy.

And I am making some sewing progress again, which is SO good. I had those two little bags waiting for ages, now they're almost done except for zippers and something to hang them from the shoulder. I'm planning to buy all notion as soon as I've figured what other things I might need for my next project(s) - shopping online makes me want to not pay shipping twice or more. 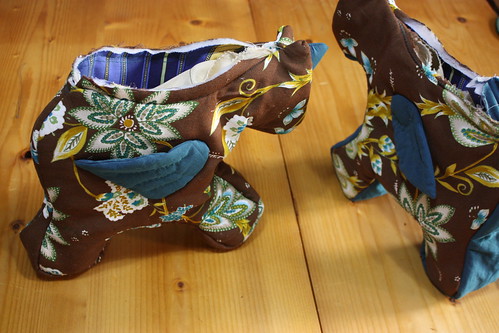 Except for some thread, all the materials up til now came from the stash. I have a summer skirt in this flowered fabric, and the solid teal fabric I used to make my casaque when I was pregnant with Heimlich. One of the bags is a belated birthday gift for a dear friend, I think the other will go in the shop on the site - once I have said shop up and running, and unless I decide to keep the bag for myself, heheh !

I want to make more of those, possibly for sale. There was a comment on my french blog that makes me want to sew unicorn stuffies for the kids - I know, it's actually a shame that I never went around to sewing toys for them. I have this rag doll living on my shelf begging to be finished, with pins holding her head closed, maybe I should finish her ?

Right now, though, I'm missing some appropriate fabric for the wedding dress that's currently hanging on Karringa, so I'm making something for ME. I have started a hobbit outfit for myself - yes, I know, I'm more of the elven type, but my stomach tells me I'm a hobbit, and I DO love bright colors. 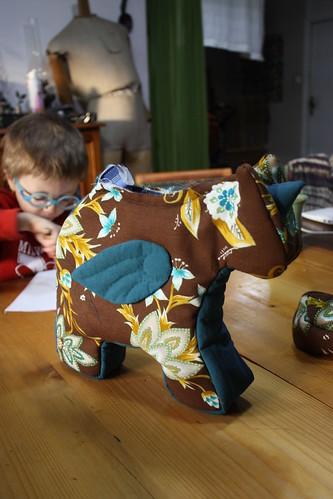 I'm sewing little bags right now, not really knowging what big projects to work on next. After this afternoon sewing session, though, I know : I need a hobbit costume for December, how did I manage to forget that ?
(Yeah, I know I'm technically too tall to be a hobbit. But I'm definitely a hobbit by the stomach ;p )

I mostly disappeared from the face of the Web lately. I'm still reading (although a tad behind, so I might have skipped some interesting stuff, errr... sorry about that. And not commenting much), I figured I should pop in again a bit.
Mostly, I've been taking care of the kids, I've been more social than usual (two days out of town on my own in two weeks is like... unheard of since Heimlich's birth !), re-reading all of the GoT books, and handsewing dozens of nametags into Heimlich's clothes as he started kindergarten.
I mostly neglected sewing, but for mending a few things, and my blog until recently. Today I finally finally finished typing and editing my post on 1890s chemises. I'd still like to find images of the printed batistes I found mentions of, still waiting for some answers from a museum (here's hoping they actually answer, they have some images and they're willing to show them to me without asking a few hundred euros for it...)
I will not register for printmaking classes this year, for time and money reasons. I have other graphic projects in my head anyway, and I want to try my hand at the press I have at home - even if it only does relief print.
Oh yes, the post, BTW : here be chemises. There's a button at the bottom of the page if you feel adventurous enough to let google translate it to you.

I've been going through my books for my 1890s research... project... thingie. All in the name of going back to basics and looking for what's really typical in terms of shape and trim for 1890s lingerie. Turns out colored lingerie seems to be all the rage. I can't find a single fashion column between 1893 and 1898 that would mention lingerie and NOT mention color. Pale pink, pale blue, and pale pink, blue or purple flowers on a white ground. I need to look into what the patterns might have looked like now.
I'm enjoying some free time as the kids are with my parents and I'm home alone. I "only" have to make about 10 pounds of plum jam this afternoon. The plum tree is full of ripe fruit. We've have various cakes already. Tonight I'm going to try duck with a plum sauce, and this afternoon jam. And most of the fruit is still ON the tree. I've picked over 30 pounds of plums already. Does anybody want some ? 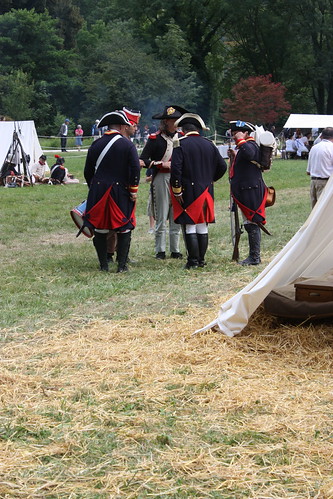 Our trip to Vizille, with Heileen, Lady Darkstone (who was in a 100%-not-historical mood), and the kids was on Sunday. We were lucky to have reasonable weather (i.e. not too TOO hot). Despite a massive hair disaster, we managed to get there in time to say hi to our friend Antonia, have a picnic in the (gorgeous !) park, then went bakc home so that the kids could take their nap under the Home Geek's supervision (turns out they didn't want to nap that day, oh well...), went back to see the end of the battle and tour the museum some. It was fa-bu-lous. In fact, we had such a great time we didn't take that many pictures.

The theme this year was 1792, so Heileen and I went with Directoire fashions. I re-wore the printed cotton I had made last year and focused on making new stuff for the kids. I just added a last minute cockade and changed the turban arrangement. I intended to add feathers but didn't have the energy in the morning, and decided I didn't want to brave the wind int he afternoon, so the feathers stayed in the car. Heileen wore her fabulous pleated back Ikea-sheets Directoire gown, that I had not seen in person yet.
Heimlich has outgrown last year's skeleton suit, so he got a new one. I just changed the lapels' color form the original plate to make it more patriotic. I made him a new chemisette out of linen and cotton scraps, the jacket and trousers are of plain Ikea cotton with buttons I found on eBay ages ago (labelled as ex-DDR buttons); the scarf is a simple tube from a remnant of my han bok project. Yay for a 100% from stash project ! I didn't ahe the time to hunt down correct shoes nor make a new hat, so he wore the same non-period hat as last year (which he loves loves loves. When I dug it out on Saturday he had to wear it to breakfast !) and his usual shoes. 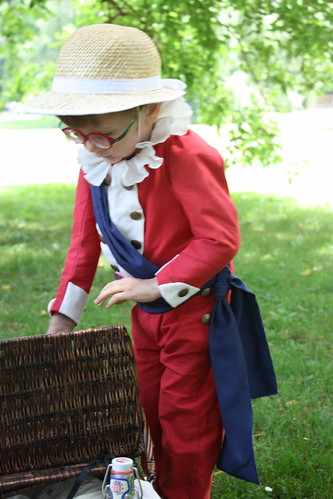 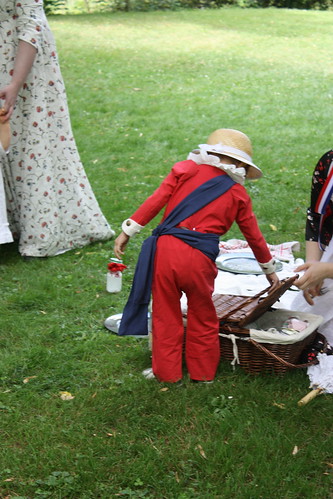 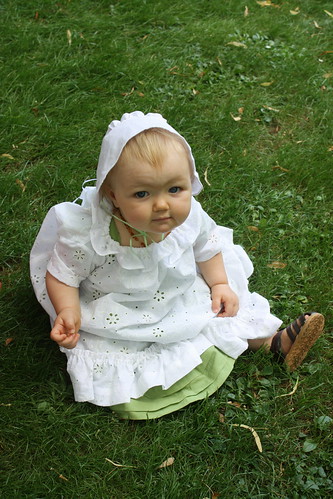 My fabrics for Toad being very fine and transparent, I made her an underdress to go under the "chemisete" sic), a simple green cotton chemise-style dress fitted with two drawstrings around the neckline and chest ( a few detail shots, including growth tucks, here). The white chemise dress is put together out of rectangles and triangular underarm gores, with just one drawstring at the neckline. The fabric is a fake eyelet lace (the "embroidered" parts are actually some kind of printed puff paint... yeah, I know, puff paint... *giggles*). The cap was a last minute addition, from cutting diagrams from the Kannik's Korner infant pattern. I only had to buy the ribbon for the ties, everything else came form the stash as well. In fact, except the white fabric, everything came from the scraps bin.
All of my pictures are on FlickR, Heileen's are there as well. 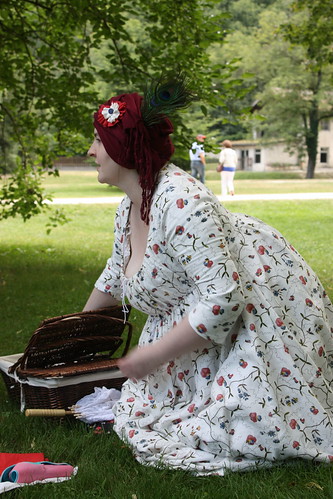 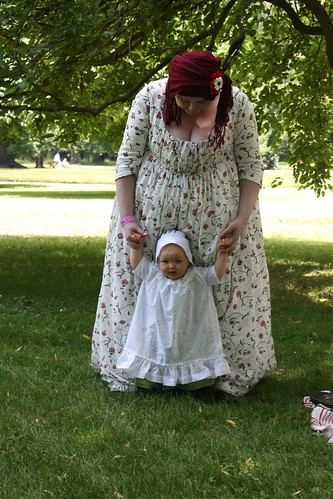 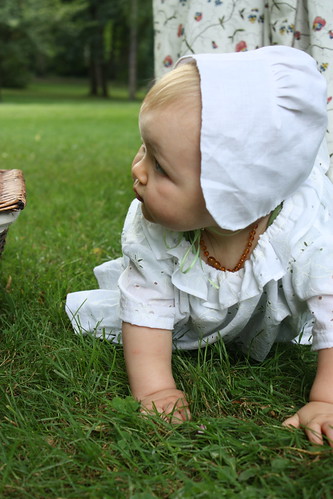 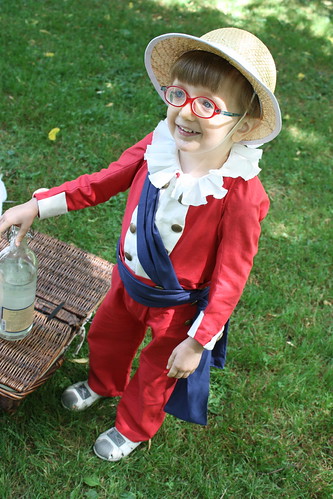 Now, I obviously need to print and start carrying business cards around, especially when I'm in costume. We had one lady come up to us with stars in her eyes "Did you make that ?" "Can I touch it !" "Oooooh the back is beaaaaautiful..." I gave her my mobile phone number, but I felt like such a fool for not having the cards ready.

It was HARD to get those two pictures. Almost heroic I'd say, but I did it. Proof that the new skeleton suit fit.I've patterned and cut out the lapels, and just patterned the cuffs. Right now I'm trying to get some pants done. I patterned them at the playground this morning, yay for playground friends that keep the kids busy !
Oh yeah, I have pictures of my commission to post as well. The client was super happy, I'd have tweaked a few more things if I had had more time, but on the whole I'm pleased. And happy that I got this done with just one fitting for a body type I'm very, very unfamiliar with. The pictures are still in the digicam, though
Other than that, Nounou is on vacation for five weeks, so we're all pretty busy here. If it could just cool down a few degrees, or be horribly rainy for a few days, I'd be perfectly happy. 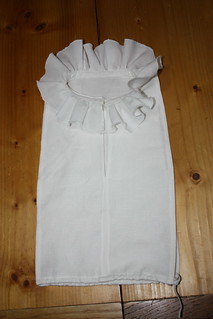 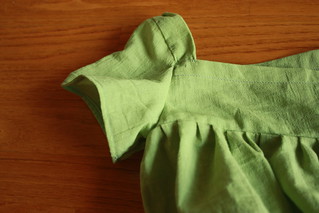 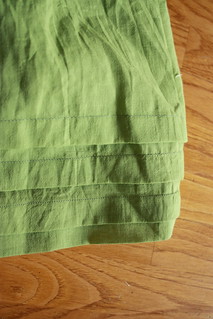 As in, costume parts ;)
First the finished chemisette for Heimlich. Linen remnant, poly-cotton batiste remnant, mother-of-pearl button, and well, elastic in the casing at the bottom for ease of dressing the wiggly child.
And on the right is a sneak peak of Toad's underdress. I'm using the source assembled on Pinterest by Heileen and Corsetra (THANK YOU ladies !). I ended up making a second, large hem at the bottom as the original narrow one wasn't exactly straight (the fabric stretches in weird directions) and it was a bit long for Toad.

No Heimlich dear, it's just the pitcher. Not every liquid is a variation of tea. ^^
Ah kids ! Keeping you up all day (and some nights as well), burping and barfing onto your favorite pair of jeans... and growing two inches in three months, making every thought of rewearing last year's skeleton suit absurd. maybe I can pretend Toad is a boy and stick her into the old suit ? Her own costume was already two small by its first outing, and she now needs something she can (attempt to) walk in...)
The plan for now is to make new outfits for both kids (machine-sewing everything and cutting some corners with authenticity) to make a 1790s visit to 1792 Vizille in July. I'd rewear my blue printed two-piece. If everything goes according to plan, Heimlich will have a new skeleton suit with cream pants, red jacket, possible cream cuffs, and a dickey that's almost done. And Toad should have white dress over a green slip. And a pudding cap if I manage to not sleep for one month straight. I suspect my plan will be a little TOO ambitious, I'll spend half of June on the beach and I'll have to scale down, but at least, I'll try.

I was completely wiped yesterday (still am today, but it's easier to concentrate, despite the fuzzy brain and runny nose, without the kids around) and was unable to scan and post those ones. I figured I'd show them here, as they are vaguely costume related. The whole concept of the series is not working out as I first thought, but there have been some happy experiments like these ones, with a combination or drypoint and monotype.

I finished the first pair of curtains, I don’t see a point in finishing the second pair before I'm sure of how we're going to hang them, so I'm at a loss at what to sew newt. I could start on the 1890s project, or I could make some quickie thing for the kids for Vizille. Heileen, is it still on for you ?
Collapse